When my husband and I first met at Starbucks over 20 years ago, he was wearing his motorcycle jacket.  Heavy leather, in red and black with thick zipper-treads up the center and at the pockets, it fit him snugly.  I remember thinking how cute he looked and how his blue eyes were like crystal reflections of the road.  Those eyes  lit up when he talked about his recent travels on the bike.

It wasn’t long before we were taking day trips, together, on that bike.  I’d wear one of his helmets and we’d ride long, winding roads, skirting the edges of the Bay area. Sometimes, we’d travel with a pack of his friends, stopping for lunch at places that had a few spaces for a row of bikes.  Rob would hold the bike steady as I tried, rather clumsily, to swing my leg off the back and find my earthly balance.

Riding on these long, open roads was addictive and I soon fell in love with the rides and the man.  I’d hang on tight to his waist as the landscape would swoosh by.  If I kept my eyes on the horizon, I could almost see the arc of the earth — but more often than not, I’d focus closer and the world would whir by, all a-blur.  Every now and then, Rob would hold on to my arm, bringing me in a little closer. Sometimes it was to tell me something, helmet to helmet, but more often than not, it was a gesture of love.  It said, “I’m so happy you’re here with me.”

If being on the back of the bike was addictive, it was also hypnotic.  As a little girl, I could never go for a ride in the car without falling asleep.  The motion put me out in seconds.  I soon learned that the same was true on the back of the bike.  I was helpless as both my eyes and body grew heavy with sleep.  Rob would feel me slump against his back and hold on to me tighter.  I’d only be “out” for a short while, and we’d joke about it later, but I understood the dangers and that you don’t fall asleep on the back of a moving motorcycle unless you have complete trust in the driver.  I did.

Rob also was a dirt bike rider.  In those days, he’d occasionally compete in local enduros or other riding events, often winning awards in his class.  If he liked riding the open road for its expansive freedom, he loved dirt trails for the skill and technique they required. After a ride, he’d have non-stop stories about mud, and creeks, and baby-head sized rocks (which apparently are tricky things).

He introduced dirt bikes to our girls when they were little.  One turned up her nose when the winds kicked up, refusing to ever ride again — but the other loves the adventure.  Our garage now is full of bikes — in all manner of upkeep.  There are parts and pieces, helmets and dirt-bike bags, and bikes propped up on their kick stands.  This hobby has its own room — the garage — and it’s got its roots deep in the hearts of both my husband and my girl. 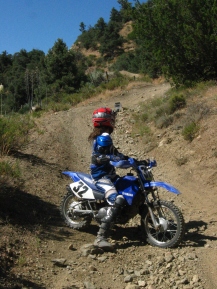 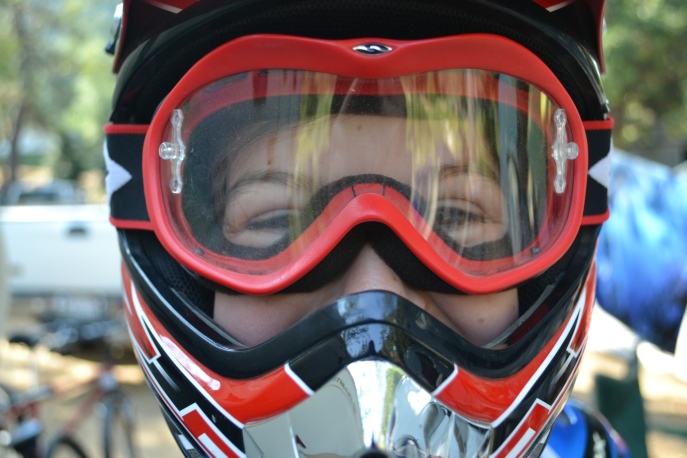 It was when middle age set in that the evidence of this love affair with bikes really took off.  What was one bike metamorphosed into five, six?  I’ve lost count.  But the man can tinker out there for hours and then run in to show off a piece of metal thing that he’s painted black.  I ooh and ahh appropriately.  “Beautiful, ” I say.

Now that I find myself facing my own little mid-life crisis, I’ve wished I had my own hobby like his, one that would take me out into the open road, out on dirt trails.  One that would cause me to break out into devilish grins at the adventure.

And then it hit me.  As I spend my summer mornings writing in my blog, sharing my thoughts and my photographs — I realize I have it all right here.  With all of you.

* The Great Yellow Beast was one of the projects my husband tackled.  The end product, sitting in front of one of our downtown murals, doesn’t look at all like it did when Rob first brought it home.  Then, it looked more like a bucket of parts.  The restoration was a labor of love — and I shot some pictures for him to submit to an on-line group of bike enthusiasts. Here are a few: 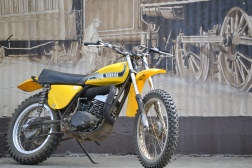