After the long, hard slog of autumn, it’s the morning of Christmas Eve.  I am a swirl of thoughts and emotions as I face my fears and count my blessings.  My older daughter is home from college, having survived her first semester with many triumphs, and my younger one still has that Christmas sparkle in her eye. The younger one has decided she’s in charge of the Elf on the Shelf, which we never had when they were younger but that suddenly appears in all sorts of unpredictable places now that she is a high school junior. The older one seems to be collecting hugs to use for a rainy day. 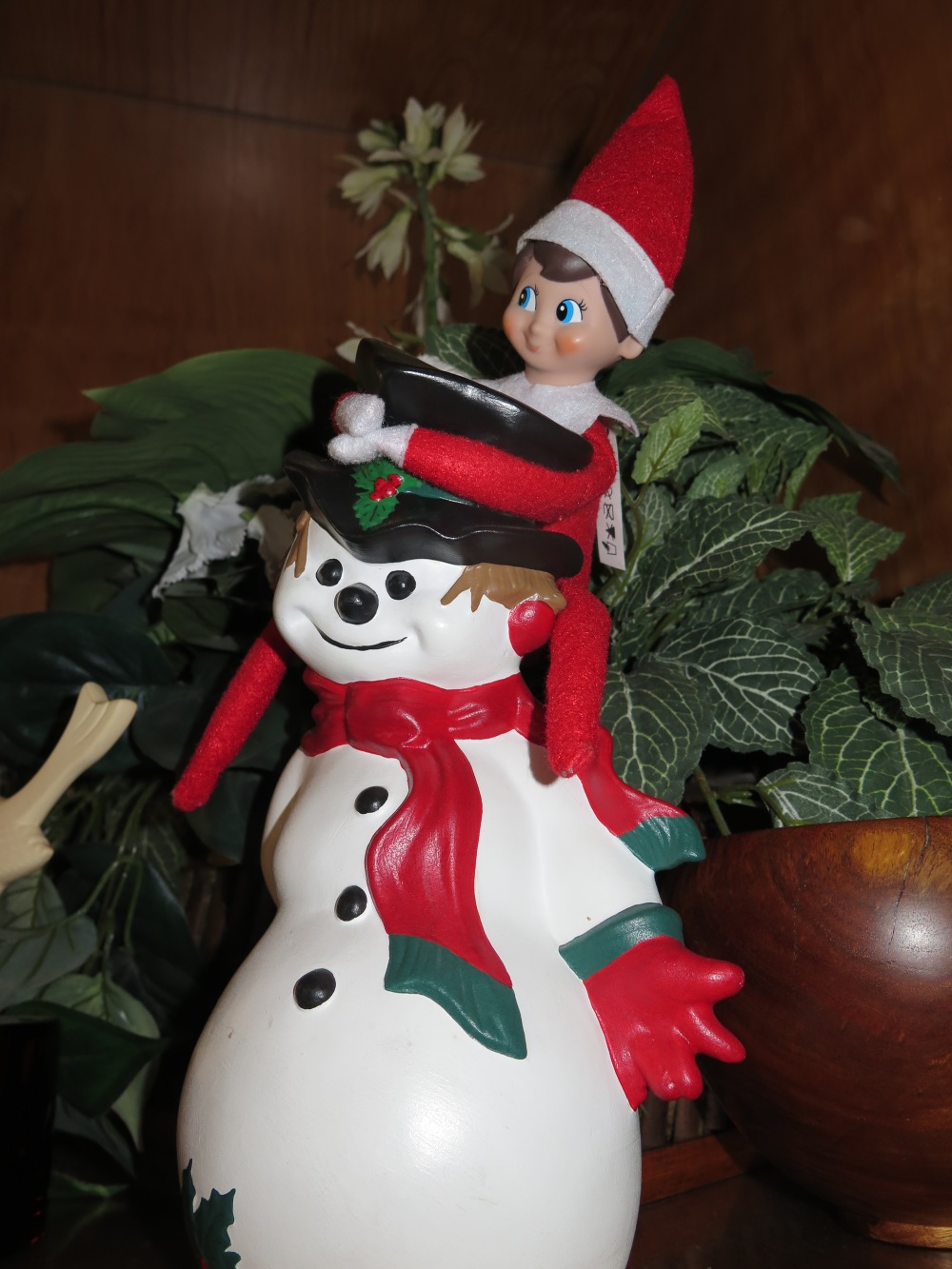 Collecting hugs seems like a good idea to me, especially since the future in the good ol’ USA seems particularly bleak and frightening.  Holding each other and carrying our most vulnerable is probably the most important thing we can do in these turbulent times.  We’ll be faced daily with what that means and what will be required of us.  Right now, I only have the past to look to for answers and those answers are murky at best.  I wish we weren’t in such uncharted territory.  Those, like me, who find the incoming administration an affront to our American ideals and values must lodge a strong resistance.   We will need steadfast leadership, but each of us will also have to assume the role of leader in our own spheres of influence: our families, our communities, our towns and schools, our churches and temples.

But today I am focused on Christmas – and a tiny baby who brought light to the darkest crevices of the earth.  As I look around my home, decked with decorations, I gather clues as to how to shine that light.

The Nativity I put out each year is old and worn.  Poor Mary, mother of God, has lost some of the paint on her hair and the shepherds have chips.  The Baby Jesus — oh my poor baby Jesus — has lost an arm, but he sits in his cradle of straw each year, offering hope.  Despite how tough the years have been on this tiny Nativity, it sits in my window, reminding me of the way light was brought into the world: born in the midst of chaos, and in quiet wonder.  If my Nativity has survived countless moves in a tattered box, a box I pack carefully each year and carry with me to wherever my home is, then surely we will survive these crazy times.  I have hope. 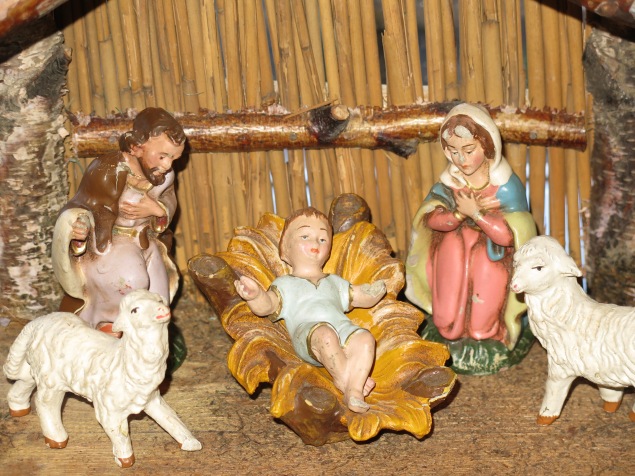 The ornaments on the tree each have a story.  We’ve collected them through the years.  I can remember how and where we’ve acquired each one, the friends who gave them, the way some of them were passed down from family.  Like the gifts the Magi brought, my ornaments are symbols of love.  Love is the best tool we can use to combat hate and bigotry.  Love is light that shines in a weary world.  We need to wear it loudly.

There are two porcelain angels on my tree.  The Christmas after my father died, I had a two-year old and an infant at home.  The angels were gifts I bought for the girls from Hope Hospice, a local group that provided grief support after the loss of my dad.  The angels, while reminders for my girls that there are angels watching out for them, are my touchstone-reminders that in the darkest hours, when grief and hopelessness are all you can hold, there are people ready to help.  Mr. Rogers, in his button-down sweaters, always said to “look for the helpers” and I have found, through the years, that helpers are never far away.  Over the coming years, we will need to look for the helpers.  We will also need to BE the helpers. 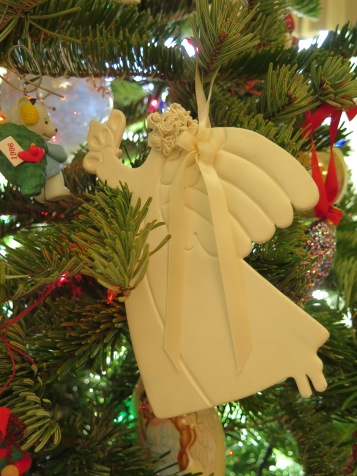 Finally, there are ornaments (a whole flock of them!)  that bring smiles and joy to us each year as we hang them on the tree.  The traditional Christmas penguins – all sorts of penguins.  When we were first married, my husband told me that a goal he has is to visit Antarctica to see penguins on ice.  I’m not much for cold – and certainly not that kind of bone-chilling cold I imagine Antarctica to be – so I started the tiny tradition of gifting him a penguin (or two or three) each year in the hopes that they would suffice.  He still wants to travel to Antarctica – and truth be told, I’m warming up to the idea – but now we have a “platoon of penguins” as he likes to say, that adorn our tree and remind us of each year that we’ve been married.  Our girls just roll their eyes, but those penguins have become some of our most cherished ornaments.  They remind me that history and storytelling are key.  As we move forward, it would serve us well to remember and tell the stories of our past, to make sure that the young know and understand how people overcome, how to cope with despair. 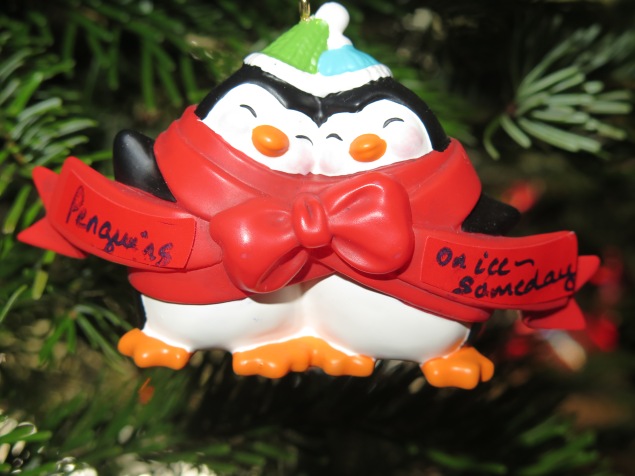 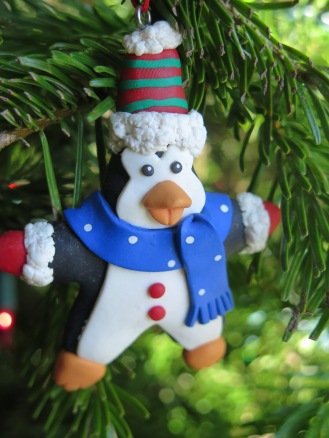 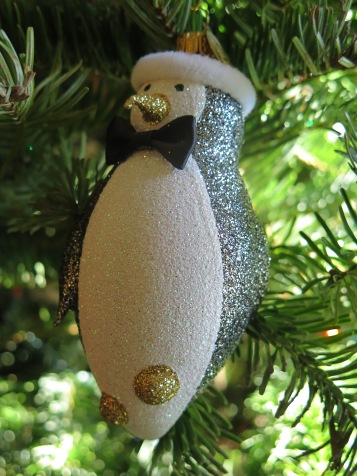 Now it’s time for me to get busy baking and cooking, because all is lost if we don’t break bread together, if we don’t have sustenance for the days ahead.  And then, I’ll take a cue from my daughter and start collecting hugs.  I think that may be the best new family tradition ever.